In 1991, AAUW-National published results of a study on the influence of gender bias in girls’ education. The study, called Shortchanging Girls, Shortchanging America was followed the next year by a second study How Schools Shortchange Girls. 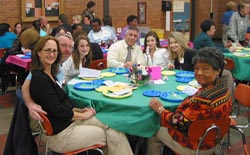 These studies demonstrated that boys received more of the teachers’ time, attention, and energy, resulting in girls’ loss of confidence and self esteem in the fields of math and science, a decline in school achievement, and the elimination of future career possibilities. Consequently, many girls gave up and did not take science and math courses in high school.

Ann Grossman, one of our founding members, suggested that we might encourage girls to continue in these fields of learning by recognizing their achievement in the seventh grade. Thus, the birth of the Girls’ Recognition Dinner.

The first year, a small number of 7th grade girls selected by their teachers were invited to a dinner in their honor. Sponsoring teachers, the girls’ parents, and AAUW women were also invited.

That year we had a pot luck dinner. One year, we even ran out of food. In May 2006, we had our 10th annual Girls’ Recognition Dinner at Charles Boehm Middle School, honoring 40 girls representing 11 middle schools in 4 districts. The girls were accompanied in most cases by their sponsoring teachers and their parents. Including AAUW members, approximately 200 people attended.

Originally, Ann Grossman did most of the planning and work herself, bringing in other AAUW members, teachers, and community businesses. Today, we have about 50 dedicated AAUW members working together, along with business and community support, to carry out Anne’s vision.

Starting in 2007, the dinner became an evening reception. Held for many years at Charles Boehm Middle School, the event  recognizes over 40 girls every year. And another highlight has been added – former recipients now moving on to college return to tell the girls about the effect of the award on their lives and studies.

For information about the Girls’ Recognition Reception, contact us.