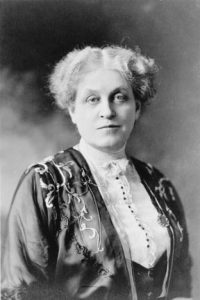 A reenactor from the American Historical Theatre, will bring you her story, “beginning with the Iowa farm girl who stood up for justice to the 40-year veteran of Woman Suffrage who became one of the most well-known women in our country in the first half of the 20th century.”

Join other AAUW Makefield Area members and friends as we attend the performance and get started on the celebration of the 100th Anniversary of the 19th Amendment, which will continue next year.

The program is presented by Historic Fallsington, Inc., and is free, but they will need an estimate of attendees. If you’re interested in attending, contact communications@aauwmakefield.org.