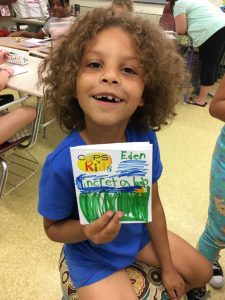 Cops ‘n’ Kids volunteers Joined up with Ivin’s Outreach Center to work with kids in Morrisville and Bristol Boroughs at the 21st Century Learning Center Camps this summer.

Once a week for four weeks in June and July, the volunteers were in Morrisville. The readings kicked off with The Word Collector by Peter Reynolds for Grade 3 and 4.  The children then made a word wall mural where they recorded  favorite words of their own and drew pictures of what they loved best about the story.  Grades 1 and 2 heard The Gruffalo and Wombat Stew drew responses to the story on a floor mural.

One week had a spider theme for all grade levels; another week, highlighted dog stories and made dog bookmarks.   Finally, children made a book with all their memories of Cops ’n’ Kids @ summer camp!

Monday July 30th, we read to children at Snyder Girotti Elementary School run by 21st Century Learning Centers in Bristol Borough.  We read You Ain’t Gonna Paint,  a hilarious story about a boy who paints himself despite his mom’s efforts to hide the paint.  The children drew their reactions to the story and chose free books to take home. Police from Bristol Borough were there and autographed books for the children.

The pictures say it all: See the photo album on Facebook