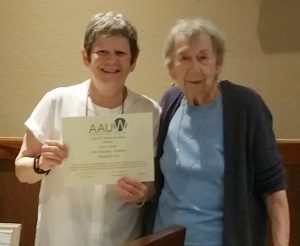 I met Mary Auker for the first time on Monday, November 13. I had heard lots of exciting things about Cops ‘N Kids Delaware Valley and was looking forward to meeting the person behind the program. Mary did not disappoint.

The first question I asked her was how she would define herself. Who exactly was Mary Auker? Her answer was simple. She is a retired reading specialist and a widow. (She and her husband had been childhood sweethearts.) She’s a grandmother of five children, aged eight months to sixteen years. She has a passion for children and reading and books, hence the children’s literacy Initiative and the Cops ‘N Kids Delaware Valley program. She is a native Pennsylvanian, grew up in Altoona, later lived in Lansdale and Bethlehem. It was in Bethlehem where she taught reading at Northeast Middle School.

I asked her if she had ever traveled to a foreign country. She said that she had lived in Korea from 1969-1970 when her husband was serving there. She taught English in a tiny Korean village mission school. To get there meant walking dirt paths along rice paddies and past soldiers with guns.

We talked about hobbies. She loves photography, but admitted that she doesn’t have much free time for hobbies because she babysits a grandchild several days a week and the rest of the time is devoted to Cops ‘N Kids.

One of the questions I asked is what she wishes people knew about her and what special talents she possesses that most people aren’t aware of. She modestly explained that currently, her focus is primarily on children’s literacy. If every parent and grandparent understood the difference that reading to a child everyday can make in a life, children would be falling asleep to a story instead of to the noise of the TV or X Box. That, and her grandchildren, seemed to be her complete focus. I was particularly interested in how she first became acquainted with AAUW and her story was fascinating. Mary’s mother had been a long-time AAUW member in Altoona, and as a child, Mary used to help her mother set up for AAUW meetings. But what was most significant to me was her explaining that in Altoona, in those days, AAUW had a special meeting house that AAUW actually owned. That’s certainly a novel idea.

Mary mentioned two people she is grateful to during the interview. One is Kate Sweeny, who works with her on Cops ‘N Kids. She said that both she and Kate are inundated with donated books and that these thousands of books seem to be taking over their homes. The second person is the son of Helen Sudhaus, who had made a generous donation to Cops ‘N Kids and to whom she is most appreciative. Mary had mentioned several times that Cops ‘N Kids has so many books that a place is really needed to store them. I asked if she meant someone’s empty garage, but that was not the case. What the project needs is a room somewhere where Cops ‘N Kids volunteers clean, sort, label and shelve the donated books in preparation for distribution. So if anyone out there has a space that you could donate for this noble project, please contact Mary.

On ending the interview, I asked Mary what would be her wish if she could have one wish come true. Her reply was less divisiveness in our country. If I were a drinking person, I’d raise a glass to that.