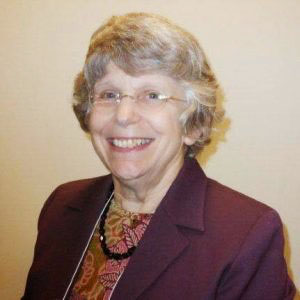 Harriet was born in Ottawa, Canada, where she grew up. She attended the University of Toronto for her Bachelor’s degree in Slavic Studies and subsequently Columbia University for her Master’s and Ph.D. She had always been interested in Eastern European history, especially Jewish history, linguistics, and foreign languages. It was amazing how many languages she studied. Beginning in high school or earlier and through college, she learned to read and speak (at one time or the other) Russian, Serbo-Croatian, French, Spanish, Hebrew, German and of course, English. She also studied Latin and loved Latin grammar. She always knew that she didn’t want to be a high school teacher; she wanted to be an academic; and that she has always been.

When she attended Columbia University for her graduate studies, she lived at International House. That is where she met her future husband, Phil. Harriet and Phil have two sons and five grandchildren. (The sons are forty and forty-two. The grandchildren range in age from five through twelve.)

Harriet is a teacher and an author. She has published three books: Jewish Politics in Vienna, The Jews of Yugoslavia, and Female, Jewish and Educated. As for hobbies, she likes to read, cook, and go for walks. She enjoys ballroom dancing, playing Maj-Jongg, and teaching—which is her very favorite. She has visited every continent except Antartica.

Harriet explained that AAUW gave scholarships for completing graduate school. The requirement was that the foreign students had to return to their native country afterwards. However, Harriet became engaged to Phil, an American. Fortunately, the Canada Council interceded. Harriet married Phil, and subsequently AAUW gave her an honorary scholarship.

Even though Harriet is retired, she still teaches in Philadelphia at OLLI, the Osher Life-Long Learning Institute. Her class will be an arm-chair travel course this summer.

I like to end my interviews on a fun note. So I asked her what menu she would choose, from appetizer to dessert, if a famous chef would make it for her and her guests. After much consideration, she decided that she would start with a vegetable Spring Roll. The main course would be salmon, mashed potatoes and asparagus. For dessert there would be a flourless chocolate cake. Delicious!